From: Handcarts and Hellholes: A Brief History of Gotham City
by Aristotle Rodor (Dennis O’Neil)

It is said that when Solomon Zebedia Wayne finished his first tour of Gotham Village, he gazed upward and mumbled a prayer of thanksgiving. He had found his home, his vocation, and the source of his eventual fortune. When young Wayne came to Gotham with a Harvard degree, a law book and a Bible, the settlement was languishing despite an almost ideal location, with the Atlantic Ocean on one side and an inland river on the other – the same kind of location that had already made Gotham’s neighbors, Boston, New York and Metropolis, powerful urban centers.

“There were a lazy lot,” Wayne later said of the Gothamites. “Oh, they were burdened with other vices too, among them a gluttony which they entertained so long as it did not require effort of them. They were also formidably stupid. But indolence was their primary sin. It was as though the whole of them were cursed with sloth. I feel, however, that with divine assistance, my gifts are ideally suited to bring about a blessed and beneficial change.”

Solomon prevailed on a classmate’s father to help him obtain a federal judgeship and then, with what a contemporary described as “zealous glee,” he began his campaign to reform Gotham. As a judge, he dispensed the harsh justice of an Old Testament patriarch and as an entrepreneur, he started a dozen businesses. Within six years, he was Gotham’s leading citizen, and its most posperous. But he was not satisfied.

“I feel that my efforts have been insufficient,” he wrote to an uncle in Boston. “There is here nothing of that focus of piety and industriousness that marks the mighty cities of Europe. Indeed, at times I feel that Evil Seeps into our precincts from the areas of Godless Nature which surround us, that the Dark One rides the winds that waft through our lanes from the corruption fo the woodlands, depositing lodes of Malice in our eaves and crannies.”

Solomon discovered what he believed to be Gotham’s salvation when he met Cyrus Pinkney, a young architect who appeared in his court as the victim of an assault. Pinkney, several years out of university and yet to find a commission, showed Judge Wayne his portfolio of sketches and plans, and found his patron. Pinkney’s vision coincided perfectly with Solomon Wayne’s. A few months later, in a speech to the Property Holders Association, Wayne asked “What is a city, gentlemen? A sanctuary! A stronghold! A fortress! A bulwark against the godlessness of the wilds wherein we may nurture the fits of Christian civilization and be protected from the savagery which lurks in untamed nature.” 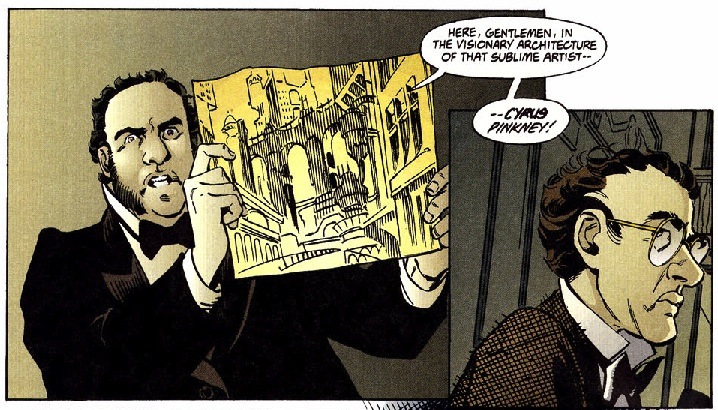 In Pinkey’s buildings, Wayne saw his fortress. He sold most of businesses, borrowed as much money as he could, persuaded anyone who would give him a hearing to do likewise and commissioned the first of the so-called “Gotham Style” structures to be built in what is now the center of the City’s financial district. Although vehemently criticzed by Wayne’s fellow Gothamites, the edifice pleased the judge and, in fact, was highly successful in that it attracted others to locate their ventures nearby – became, in fact, the focal point for a thriving commercial center. Together, Wayne and Pinkney raised no fewer than a dozen other, similar buildings. Pinkney’s style was, for a time, widely imitated, both in Gotham and elsewhere – this despite vilification from virtually every architectural journal in the world.

Pinkney died while still a young man, on the eve of his fortieth birthday. Solomon Wayne lived to be 104, long enough to see all his dreams realized; Gotham City became the busting hub of industry he had imagined. But it also became a haven for crime, known more for its poverty, the squalidness of its slums and the utter corruption of its government than for commercial and cultural achievements. On his deathbed, Solomon Wayne said, “I wished to lock evil out of men’s neighborhoods and hearts. I fear instead I have give it the means to be locked in.”

[Text excerpted from Batman Legends of the Dark Knight, No. 27: Destroyer, Part 2]