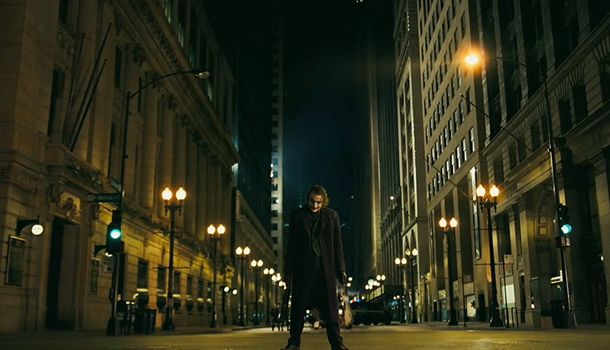 Since it’s inception, Gotham City has been presented as the embodiment of the urban fears that gave rise to the American suburbs, the safe havens from the city that they are. Gotham City has always been a dark place, full of steam and rats and crime. A city of graveyards and gargoyles; alleys and asylums. Gotham is a nightmare, a distorted metropolis that corrupts the souls of good men. In the excellent book, Woody Allen on Woody Allen

, which takes place over the course of a single night in a vaguely European village. “Once you get out in the night, there is a sense that civilization is gone. All the stores are closed, everything is dark and it’s a different feeling. You start to realize that the city is just a superimposed man-made convention and that the real thing that you’re living on is a planet. It’s a wild thing in nature. All the civilization that protects you and enables you to lie to yourself about life is all man-made and superimposed.” In other words, civilization ends at night. And in Gotham City, it is always night. As Batman writer and editor Dennis O’Neil has said, “Batman’s Gotham City is Manhattan below Fourteenth Street at eleven minutes past midnight on the coldest night in November.” In Christopher Nolan’s Batman film, The Dark Knight (the dark night) the Joker exploits this weakness in man, the eternal fear-of-the-dark where all our self-imposed rules and behaviors are worth nothing; where man returns to a more primal nature. He wants to prove that our civility is a superficiality imposed by the constructs of society and the safety of our buildings.

With his psychological origins linked to the rampant criminal behavior of Gotham, Batman is inarguably a product, an expression, of the city he lives in. But is he its demon or its savior? The duality of Batman’s effect on Gotham has been frequently debated in comics, and recently in the Nolan Batman films. Despite his noble intentions, it’s entirely possible that Batman is in fact one of the major causes of Gotham’s problems. In dressing up as a bat, he may have succeeded in instilling a primal sense of fear into the citizens of Gotham, but he’s also inadvertently inspired a new breed of criminal. Through his actions, through his very existence, he has directly influenced the rise of some of the city’s “super-villains.” Batman Begins makes this threat all too real in the final conversation between Jim Gordon and Batman:

In The Dark Knight, the Joker is constantly likening himself to Batman, showing that there may be an all-too-thin line between the criminally insane and the supposedly heroic; a duality expressed literally in the good-guy-turned-bad Harvey “Two Face” Dent and in a series of conversations between the Joker and Batman.

The Joker: Oh, you. You just couldn’t let me go, could you? This is what happens when an unstoppable force meets an immovable object. You are truly incorruptible, aren’t you? Huh? You won’t kill me out of some misplaced sense of self-righteousness. And I won’t kill you because you’re just too much fun. I think you and I are destined to do this forever.
Batman: You’ll be in a padded cell forever.
The Joker: Maybe we can share one.

Batman: Then why do you want to kill me?
The Joker: [laughs] I don’t want to kill you! What would I do without you? Go back to ripping off mob dealers? No, no, NO! No. You… you… complete me.
Batman: You’re garbage who kills for money.
The Joker: Don’t talk like one of them. You’re not! Even if you’d like to be. To them, you’re just a freak…like me!

To the Joker, and probably to many people in Gotham, Batman is just the opposite side of the same coin.

[parts of this post were excerpted from On Influence: Batman and Gotham City]