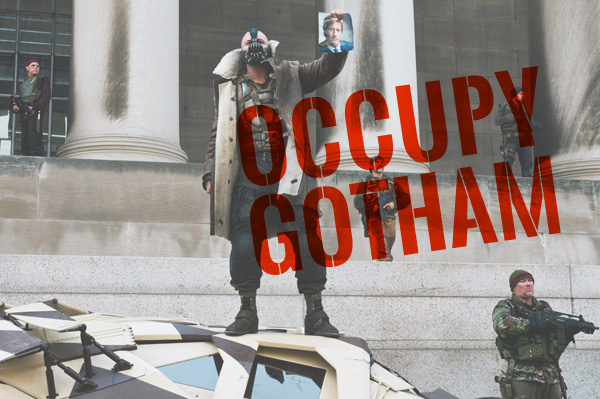 Slovenian Philosopher, cultural critic, and overall public intellectual Slavoj Žižek has written an excellent piece considering Christopher Nolan’s Batman films as political metaphors, focusing in particular on the civic uprising led by Bane in The Dark Knight Rises. In the essay “Dictatorship of the Proletariat” Zizek compares Bane’s motives and ideology  to those of Harvey Dent / Two-Face, the Joker, and even Batman himself.

Back to Nolan, the triad of Batman-films thus follows an immanent logic. In Batman Begins, the hero remains within the constraints of a liberal order: the system can be defended with morally acceptable methods. The Dark Knight is effectively a new version of the two John Ford western classics (Fort Apache and The Man Who Shot Liberty Valance) which deploy how, in order to civilize the Wild West, one has to “print the legend” and ignore the truth – in short, how our civilization has to be grounded onto a Lie: one has to break the rules in order to defend the system. Or, to put it in another way, in Batman Begins, the hero is simply a classic figure of the urban vigilante who punishes the criminals where police cannot do it; the problem is that police, the official law-enforcement agency, relates ambiguously to Batman’s help: while admitting its efficiency, it nonetheless perceive Batman as a threat to its monopoly on power and a testimony of its own inefficiency. However, Batman’s transgression is here purely formal, it resides in acting on behalf of the law without being legitimized to do it: in his acts, he never violates the law. The Dark Knight changes these coordinates: Batman’s true rival is not Joker, his opponent, but Harvey Dent, the “white knight,” the aggressive new district attorney, a kind of official vigilante whose fanatical battle against crime leads him into killing innocent people and destroys him. It is as if Dent is the reply of the legal order to Batman’s threat: against Batman’s vigilante struggle, the system generates its own illegal excess, its own vigilante, much more violent than Batman, directly violating the law. There is thus a poetic justice in the fact that, when Bruce plans to publicly reveal his identity as Batman, Dent jumps in and instead names himself as Batman – he is“more Batman than Batman himself,” actualizing the temptation Batman was still able to resist. So when, at the film’s end, Batman takes upon himself the crimes committed by Dent to save the reputation of the popular hero who embodies hope for ordinary people, his self-effacing act contains a grain of truth: Batman in a way returns the favor to Dent. His act is a gesture of symbolic exchange: first Dent takes upon himself the identity of Batman, then Wayne – the real Batman – takes upon himself Dent’s crimes.

Finally, The Dark Knight Rises pushes things even further: is Bane not Dent brought to extreme, to its self-negation? Dent who draws the conclusion that the system itself is unjust, so that in order to effectively fight injustice one has to turn directly against the system and destroy it? And, as part of the same move, Dent who loses last inhibitions and is ready to use all murderous brutality to achieve this goal? The rise of such a figure changes the entire constellation: for all participants, Batman included, morality is relativized, it becomes a matter of convenience, something determined by circumstances: it’s open class warfare, everything is permitted to defend the system when we are dealing not just with mad gangsters but with a popular uprising.

The article is a fascinating read and one of the more trenchant academic analyses of Nolan’s Batman films.